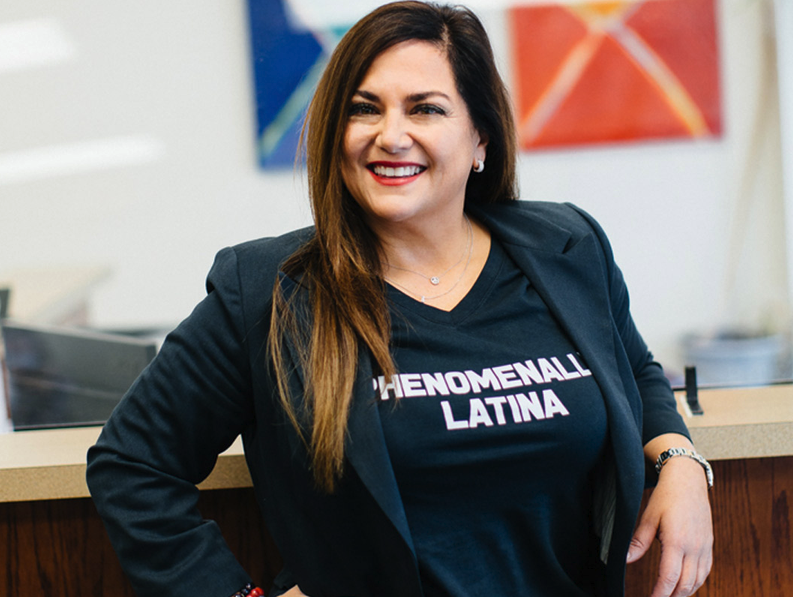 This article was originally posted by Omaha Magazine and is authored by J.D. Avant

Midwest Maintenance is more than an occupation for CEO Jamie Gutierrez. Boasting locations throughout the Midwest and beyond, the company started as a small business established in her parents’ South Omaha garage in 1965.

The culture permeating South Omaha was different then, but Paul and Alice Gutierrez’s fledgling cleaning company would help pave the way for the region’s burgeoning Latino population.

“I grew up in a community where I was the only brown face in my public school,” Gutierrez recalled. “I used to look in the phone book and we were the only Gutierrez.”

Her parents believed in taking the initiative to empower others. When there was no Catholic Mass in Spanish in the ’60s and early ’70s, Paul and Alice fought hard alongside other Latino leaders to provide Mass for non-English speaking people.

Gutierrez’ father also sat on the board of some longstanding community-based organizations, including the former Chicano Awareness Center, now known as the Latino Center of the Midlands.

“I didn’t realize the impact that my parents had at the time. It was just something we did,” Gutierrez said. “They were pioneers where the Latino population wasn’t as prevalent as it is today. They would drag us to events at the Chicano Awareness Center and I’d be the coat-check girl or part of the cleanup crew.”

Gutierrez thought it was important as a Mexican-American woman to have a viable form of credibility. Graduating from Kearney State College (now University of Nebraska at Kearney) in 1989, she pursued knowledge at multiple institutions, including UNK, Creighton, and Stanford University.

Gutierrez returned to a much different South Omaha after graduation.

“When I came back in the early ’90s I was amazed at the influx of Latino population,” Gutierrez said. She loved the new energy the area offered, including restaurants and stores catering to her heritage.

Wanting to remain in the community, Gutierrez went to work for Midwest Maintenance after college. She became the company’s president in 1995, and went on to take over ownership and operate as CEO in 1997. Under her leadership, the business flourished, and Midwest Maintenance developed into a nationwide enterprise with a national headquarters on 29th and Q streets. According to the company website, they are recognized as Omaha’s largest minority, woman, and Latino-owned business.

Gutierrez honors her parents’ legacy by participating in an assortment of civic and philanthropic work in her free time, including sitting on the executive committee and board at the Greater Omaha Chamber. She shows great passion for nonprofit organizations such as the United Way of the Midlands and the Police Athletics for Community Engagement organization, or PACE.

“I don’t think Omaha realizes the PACE program’s impact,” Gutierrez said, complimenting the organization’s efforts to provide free athletics for children throughout the city. “This group has pretty much single-handedly devoured the gang activity in Omaha.”

Officer Tony Espejo is Gutierrez’ high school friend and founder of PACE. After coming up with his plan to get kids off the streets, he knew his longtime friend would be a great asset. Her initial sponsorship dollars helped purchase sports equipment, allowing kids to participate in the program at no cost, an essential component to PACE’s growth.

“Jamie gets it, she’s from down here,” Espejo said. “If you go back 10-to-12 years, there were still Latino kids hanging out on corners with shaved heads and baggy clothes. You don’t see that now. The gangsters I do see are a weaker species because the kids that are big, fast, and tough are playing sports because they’re free.”

Espejo refers to his friend as the tip of the spear piercing the heart of Omaha’s gang problem. “Jamie has been instrumental in our business plan and setting up our board,” he said. “Jamie wants the South Omaha Latino community to thrive.”

Gutierrez admitted the responsibilities of business and patronage keep her busy, but she recognizes the need to encourage young women and children to surpass her accomplishments and be fearless. She would like to see more Hispanic and female bosses, on boards and in different positions.